NOW IN PRODUCTION!!!
Documentary about the Sontag Brothers and Chris Evans
based on the book "Robbers of the Rails" by John J Koblas
Click here for details 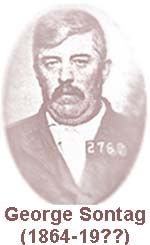 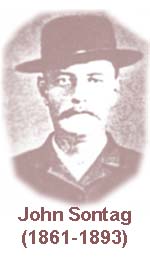 George began his life of crime when at 15 he was sent to the state reform school in St Paul for stealing cigars from his employer, Nicholas Peterson. A few years later in Omaha, after another theft, he was given a sentence at the Nebraska State Prison.

In 1889 John Sontag joined up with Chris Evans of Visalia, California and started his life as a train robber in what was to be known as the Sontag Evans gang. Two years later George became a member of the gang. They based their operations in Visalia and during this period most of their train hold ups were done in such California locations as Pixley, Goshen and Ceres.

The Sontag-Evans gang had a way of robbing trains that was simple but well thought out. Their method was to determine the place on the railroad track where they wanted to stop the train, tie up their horses and walk back to the train station. When the train arrived they'd sneak aboard the engine and hide in the blind baggage. After reaching the designated point they would appear and order the engineer to stop the train. Using dynamite they would blow up the express car and gather up the money, then find the horses and make their escape. 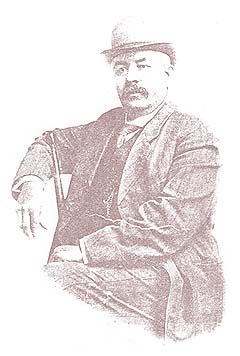 Having served fifteen years behind bars George Sontag was given his freedom and, with Opie Warner, wrote his autobiography called "A Pardoned Lifer." He also began a speaking tour and lectured about the life of an outlaw. His talks were presented in such cities as Minneapolis and Milwaukee. He also gave a talk at the Opera House in Mankato, Minnesota the town of his birth and was well received. (This was the same opera house that appeared in the 1943 Maud Hart Lovelace book "Betsy and Tacy Go Downtown.")

Elaborating on his quest to warn the public about the dangers of becoming a criminal he filmed the story of his outlaw career. The film was called "The Folly of a Life of Crime" and was filmed in Chico, California in 1915 (some sources say 1913). No copies of this movie are known to exist but George is listed as having written the story and starring as himself.

When George Sontag died is not known. Many skilled researchers have attempted to track down this information but have been unable to do so. The last documented reference to him is in May, 1929 when his mother passed away and her obituary listed him as a survivor living in San Francisco.

George Sontag shortly after his release
from Folsom Prison (circa 1908). 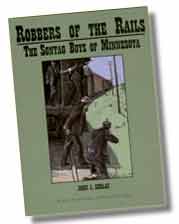 Robbers of the Rails: The Sontag Boys of Minnesota.


Newly published from the North Star Press of St Cloud, Minnesota, this book is all about the early years of the Sontag Brothers and their careers as California train Robbers.

Robbers of the Rails was written by John J Koblas who is the author of several books about the James/Younger gang.

For a list of outlaw books written by John J Koblas link to Koblas.

Sontag and Evans on TV

Learn more about the Sontag Brothers with the following URLs:

The shootout with John Sontag and Chris Evans (John's death)

Capture of George Sontag in California

Chris Evans' gravesite and some more info on the gang

Back to the top • Return to Main